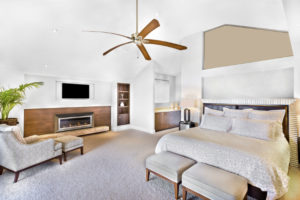 At this time of year as the temperature peaks and people start losing sleep as we struggle to stay cool at night, the annual debate is usually raging in homes across the country. Budget-conscious homeowners look for the most cost-effective ways to keep the air circulating in their properties and ponder the age-old question: is installing air-conditioning worth the extra cost and just how effective are ceiling fans?

Obviously the decision on whether to install air conditioning or ceiling fans (or both in different rooms) will be determined by a number of factors including budget, room aesthetics and running costs. However to help you make a more informed decision, we have attempted to answer some of the more common questions that we get asked. 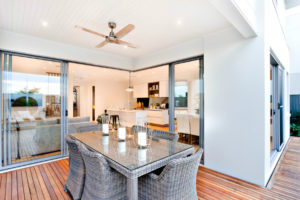 So how effective are ceiling fans when it comes to air cooling ability? While ceiling fans move the hot air up and cool air down in a room, they don’t actually lower the room temperature. If you have an airy, open house however, a ceiling fan can be great at circulating a breeze through a room and helping you feel a little cooler and less sweaty.

Does the cost of running a ceiling fan vary with its speed?

Lower fan speeds and smaller fans do not necessarily mean energy and cost savings. A ceiling fan is actually so cost effective that running your fans at a higher speed not only produces more comfortable results but there is a negligible increase in energy use. Even the most power-guzzling ceiling fans will only cost a few cents per hour to keep running.

How much does it cost to install a ceiling fan?

Aside from the cost of the fan, ceiling fans need to be installed by qualified electricians. The cost of ceiling fan installation is dependent on a number of factors including how many fans are being installed, whether there is ceiling access and whether you are replacing an existing ceiling fan. Give us a call and we’d be happy to give you a free quote.

What types of ceiling fan are available?

As with most electrical devices there is a huge range of options when it comes to choosing a ceiling fan. You can get ceiling fans with a light in the centre, remote-controlled ceiling fans and choose from different blade materials. There is also the choice between AC ceiling fans which are the traditional style motors, and DC fans which are becoming more popular as they provide better speed control of the fan, are quieter, and cheaper to run. You’ll almost certainly be able to find something that suits the size and style of your room.

So just how effective are ceiling fans in the height of an Australian summer? If you can’t afford to install air conditioning and the ongoing running costs associated with this, ceiling fans are a great alternative solution to circulating the air in your room. And if you do already have air conditioning, they can prove a useful addition to the home in reducing the running time of your air conditioning unit.

Give the friendly team at Unified Electrical a call today on 0414 751 299 and we can arrange a convenient time to come out and provide a quote to supply and install your ceiling fan today.

SUBSCRIBE TO OUR NEWSLETTER FOR REGULAR TIPS AND ADVICE: